During the last month, I learned about the awesome UIKit Dynamic animations framework. It’s a physics-based animation and it’s really fun when you use it wisely in your applications. You can add different physics-based behaviors like collisions, bouncing, gravity .. and a lot more behaviors and settings. Today I’ll take you in a quick tour on how to use the framework, and then, we’ll build together a fun demo app that demonstrates the effect of combining different behaviors, also the effect of changing magnitudes and settings of the different behavior.

So, enough talking let’s get our hands dirty!

UIKit Dynamics is a full real-world physics engine integrated into UIKit. It allows you to create interfaces that feel real by adding behaviors such as gravity, attachments, collision and forces. You define the physical traits that you would like your interface elements to adopt, and the dynamics engine takes care of the rest.

The steps to use the framework are fairly easy:

Let’s start with a simple example, the first step from the above end result animation is to only draw a square and use the UIKit Dynamics to make it fall due to gravity pointing downward.

First, let’s draw our first static square at the middle of our view. 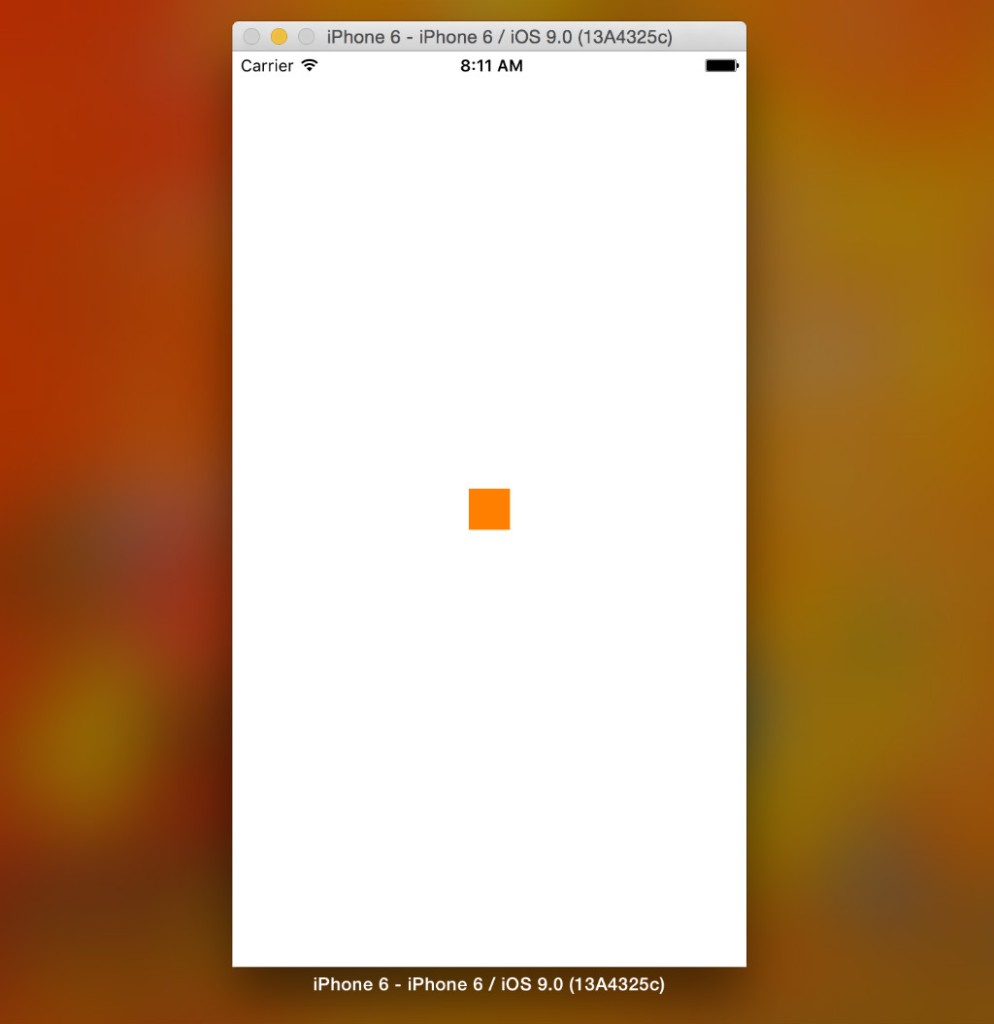 We’ll start by adding a gravity behavior to pull the square downwards, here’s how our code looks like after following the 3 steps:

Here’s how it looks:

How about making the square collides with the bottom of the view instead of running away from the bottom? To achieve this we only need to configure a new behavior (UICollisionBehavior) add it to the animator, and then add our square to the collider. Here’s how:

Here’s how it looks:

We can make our square more elastic, by creating/configuring UIDynamicItemBehavior.

You can configure multiple physical aspects using the UIDynamicItemBehavior, for example:

Don’t confuse UIDynamicItemBehavior with UIDynamicBehavior, which is the parent class of all behaviors.

In the below demo application, I only used the above steps, with some extra minor additions to help us feel the effect of changing the multiple configurations.

The demo app is available on Github, feel free clone, try & customize it.

Wait for next week’s post, I’ll be discussing 3 more points:

See you next week :]

I’ll be happy answering your questions or inquiries, just write a comment below.

Had some nice comments on Twitter, here’re few of the best:

@a_abdurrahman It looks great – you have some good skills as a tutorial writer! :]

@a_abdurrahman @NatashaTheRobot never played with UIKitDynamics before the post was a good read & I liked the iterative approach, nice work!

I will most definitely be going through this tutorial, later today! #swiftlang #UIkit #Swift2 #iOS https://t.co/ZhkTZR7FQD